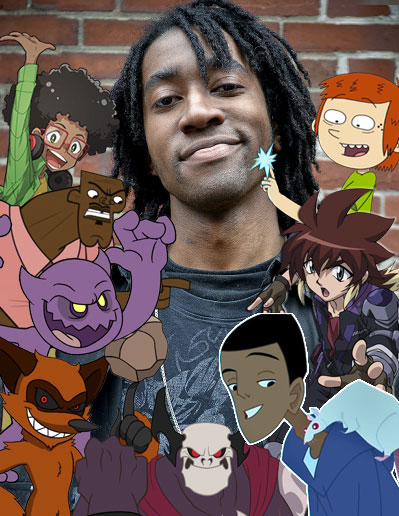 Deven Mack is a Mississauga native and voice actor in both the Toronto and Vancouver markets. At age 17, he led the charge of young online hobbyists making the leap to the world of TV animation, having performed in numerous cartoons, anime and commercials since 2006.

He also served as casting and voice director for the hit indie video game, DUST: AN ELYSIAN TAIL.

As an overtly shy youngster with strong basketball aspirations, Mack was a middle school classmate and teammate of the NBA’s Stephen Curry. All the while, he remained fascinated with the outlandish worlds and personalities of cartoons and anime (most notably, the Samurai Pizza Cats), subsciously studying and drawing inspiration for the unexpected career in his near future.

With his amateur start as “D-Mac” in 2004 on Newgrounds and eventually YouTube, he found prominence as the DOT DOT DOT viral video narrator, the eeeevil purple little demon Vile from the REINCARNATIONseries of webgames, and quirky troublemaker Rockoon, whom he continues to write and perform in the webseries and upcoming video game, TOME: TERRAIN OF MAGICAL EXPERTISE.

He would reconnect with his basketball roots in 2017 and 2018, voicing a series of Gatorade commercials featuring former Toronto Raptors star, DeMar DeRozan.